Winter is now fifteen months old.  It’s been a busy year: - our socialisers are tasked with caring for their puppy’s well-being, including carrying out routine health checks, ensuring they are the correct weight, and grooming.  They attend monthly puppy classes to develop their training and Abbey, their puppy coordinator, visits regularly to give tailored support, so Winter reaches her full potential.

“Since our last update we have moved house and been living with family temporarily.  Winter adapted brilliantly to this change and settled in no time, which bodes well for her move onto new boarders when she is in training.  She has also had her spay surgery which she recovered from brilliantly and even enjoyed wearing her suit which helps to protect the wound.

Winter attended the PATS show in Telford where she spent the day meeting exhibitors, having lots of photos taken and eating everything that was offered to her.  It was an exhausting day and she was asleep before we had even left the car park. We also spent the day at the Excel in London visiting a home building and renovating show.

Winter will often get very excited at puppy class and we spend extra time giving her space to observe and settle in to class.  She loves to join in the activities and games with me but can become over awed with all the other pups there.  We have also spent a great deal of time practising settling in public where there are a lot of distractions and heavy foot traffic.    Her all- time favourite game is still retrieval of anything that you throw for her and she continues to eat any treats. Primula cheese remains a favourite and whole carrots have also become more popular. Katy, Socialiser
For the first six months Winter’s socialiser focused on providing routine and consistency. She spent time socialising Winter around lots of people and animals, and visiting as many different places as possible.  The focus after this then changes to transferring the training completed at home or in puppy classes to ‘real-life’ situations and environments: such as ensuring Winter comes back when called if walking in the park and helping him learn to settle in busy places such as cafés and restaurants.

Winter is moving in the right direction through socialising.  She is quite a sensitive girl and her Puppy Socialiser has had to slowly build up Winter’s confidence to help her cope with the demands of becoming an assistance dog.  She has shown some anxiety when meeting unfamiliar dogs but again this has gradually improved as she has matured.  Winter has a sweet nature but can get overwhelmed at times and we are taking training at her pace in order to help her become more confident. Abbey, Puppy Coordinator

Our puppies return to the Frances Hay Centre to begin their formal training at around the age of seventeen months, although this does vary, depending on how emotionally mature and responsive to training they are.  Coordinator Abbey has been assessing Winter over the last few months and reports that she is doing well.  Until it’s time for Winter to begin her formal training, Katy will continue to attend puppy classes on a regular basis, to reinforce Winter’s basic commands.

“We’ve had a few mini breaks with Winter.  Down to Weymouth to visit family and also to South Wales.  They generally involve a paddle in the sea or a stream. She’s never been brave enough to swim, but loves running through the shallows.

I think Winter will thrive with task work, especially the retrieving items, she also loves playing tugging games and will already nose target, something which she has done naturally.

Winter is such a joyous dog and skips everywhere. She has a smile for everyone and has brought us so much laughter. She is a really sweet happy girl.”      Katy, Socialiser

There is still a lot of learning and fun ahead for Winter and the coming weeks will be difficult for Katy and her family as the time for saying goodbye draws closer. 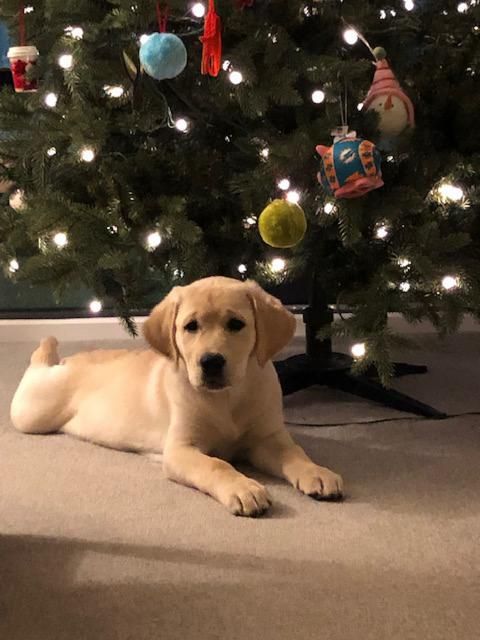 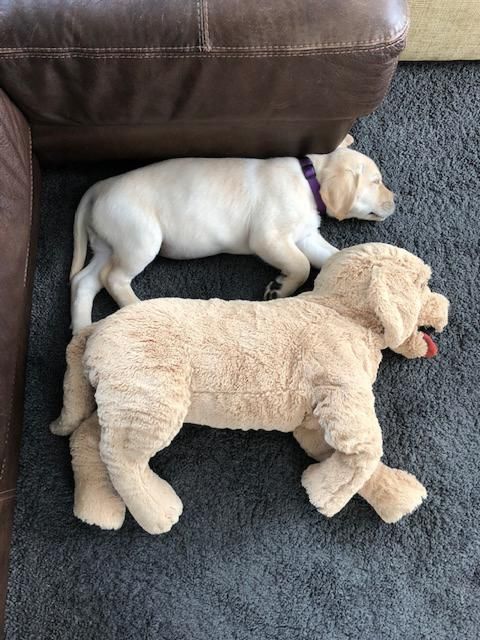